Following WWII, the U.S. Air Force sought to create a new observatory for the purpose of studying solar activity that could affect future missions, specifically V-2 rocket research. Astronomers at the High Altitude Observatory concurrently felt the need for an alternate site that could secure observations of the sun during periods when the Climax station was closed by weather.

In August 1947, Dr. John W. Evans, then of HAO, selected the summit of Sacramento Peak as the promising site of the region for a new solar research station. In 1948, the Air Force issued a five-year contract to Harvard University to oversee the Sacramento Peak Observatory with Donald Menzel as the principal investigator. During the next few years, "Sac Peak" as it came to be known, acquired a coronagraph as well as permanent housing for staff and visitors, scientific equipment, and shops.

Walter Roberts advocated that this new observatory not complete with HAO, proposing a complimentary model in which routine observations and government research would be carried out at Sac Peak and HAO's Climax site would focus on special research projects relate to the earth-sun connection. 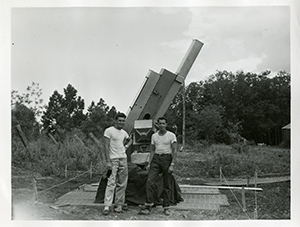 Live action footage of the sun filmed from the Sacramento Peak Observatory in Sunspot, New Mexico in 1956. There are prominence movies and other anomalies filmed in hydrogen light, acceleration between 250 and 500 X.