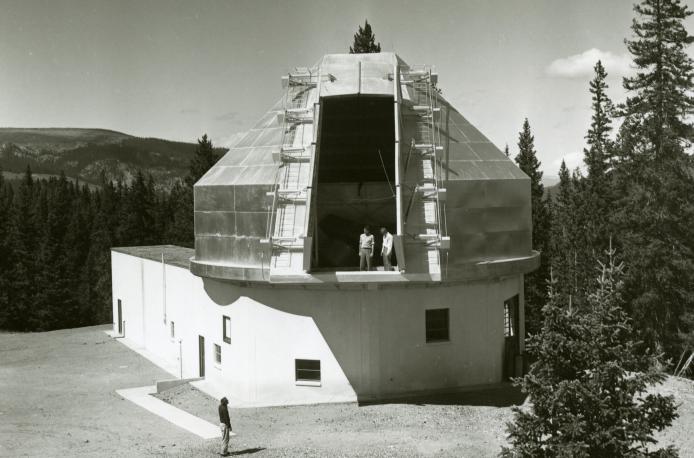 The Beginning of HAO

In 1940, Harvard graduate student Walter Orr Roberts and his doctoral adviser, astrophysicist Donald Menzel, founded a small solar observing station high on the Continental Divide in Climax, Colorado. Roberts' assignment at the observatory was to last only one year, but, with the country's sudden entry into the war, he remained at Climax as sole observer, making daily observations of the solar chromosphere and corona. These coronal observations from Climax, with their implications for potential disturbance of terrestrial radio communications, became essential to the war effort.

From these small beginnings, the station evolved into the High Altitude Observatory and grew substantially after the war. In the late forties, HAO's laboratory and administrative facilities were transferred to the University of Colorado and the gentler climate of Boulder. In 1960, HAO formally became a division of a newly-established research institute in Boulder, the National Center for Atmospheric Research.

The history of the High Altitude Observatory began with Walter Orr Roberts and the Climax Observatory in the 1940s.

Past Directors of HAO

Walter Orr Roberts, John Firor, Gordon Newkirk, and Robert MacQueen served as the first directors of the High Altitude Observatory. Explore their work and contributions to the Obsrevatory's growth through photographs, film, and oral histories.

A trailblazer, Walter Orr Roberts set up the High Altitude Observatory in 1940 on the Continental Divide at Climax, Colorado, which evolved from a one-man operation affiliated with the Harvard College Observatory to a research division of NCAR.

John Firor met Walter Roberts during his time at the Carnegie Institution of Washington's Department of Terrestrial Magnetism in the 1950s.

Upon earning his PhD in Astrophysics from the University of Michigan, Gordon Newkirk was drafted by the United States Army.

Robert MacQueen joined NCAR in 1967 as a scientist with the High Altitude Observatory, was appointed a senior scientist in 1973, and served as HAO director from 1979 to 1986.

These facilities enabled scientists to observe the sun in pristine locations that enabled better viewing of solar phenomenon.

The Climax Observatory location provided favorable conditions for studies of the solar corona due to reduced atmospheric scattering.

The Mauna Loa Solar Observatory opened in 1965 and housed the K-coronameter that had originally been used in Climax, Colorado, at HAO's first location