Upon earning his PhD in Astrophysics from the University of Michigan, Gordon Newkirk was drafted by the United States Army. He was assigned as an astronomer to the Meteorological Group of the Signal Corps Engineering Labs in New Jersey and while calculating the effects of wind response on rockets, Newkirk became interested in atmospheric optics. He began measuring the brightness of the sky near the sun and the light scattering properties of the atmosphere. Encouraged by his findings, he began to correspond with Jack Evans and Walt Roberts at HAO. In the fall of 1954, Newkirk was reassigned to Boulder, Colorado to assemble the visual sky photometer instrument, which could photographically record the atmosphere at varying levels.

Upon being discharged from the Army in 1955, Newkirk accepted a senior position at the High Altitude Observatory where he began working with Gerard Wlerick on the development of a coronograph that was to be used to study the scattered light from the electron corona. Newkirk planned an unmanned stratospheric balloon experiment to raise a coronograph, Coronoscope I, above the dust and smoke of the lower atmosphere for several hours of continuous operation. In the fall of 1960, after a failed first attempt, the Coronoscope I had two successful flights reaching an elevation of 80,000 feet outside of Minneapolis. The Coronoscope II was launched on a balloon at the National Scientific Balloon Facility in Palestine, Texas in March of 1964 and produced the first images of the outer corona without a solar eclipse. In June of 1970, Newkirk retrofitted the orbital coronograph he had built for Skylab and flew it on a balloon and in 1973, the orbital ATM coronograph was launched on the Skylab satellite. In 1980, the coronograph was launched on the Solar Maximum Mission (SMM) satellite. 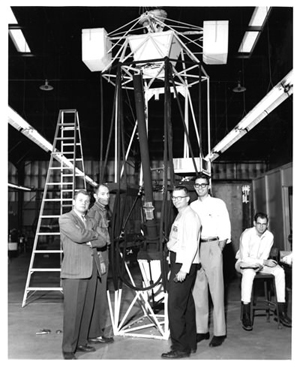 Newkirk went to Bolivia in 1966 for the first deployment of his white light coronal camera to record a solar eclipse. Over a nineteen-year span, Newkirk's radially-graded coronal camera produced some of the most spectacular and useful pictures ever taken of the white-light corona at eclipse.

In 1968, Newirk succeeded Walter Roberts and John Firor as director of HAO and Associate Director of NCAR, serving until 1979.

Simulation created by Gordon Newkirk of the sun's magnetic fields and the solar corona.