Warren M. Washington is an internationally recognized expert on atmospheric science and climate research. He specializes in computer modeling of Earth's climate. Currently, he is a senior scientist and Chief Scientist of the DOE/UCAR Cooperative Agreement at NCAR in the Climate Change Research Section in the center’s Climate and Global Dynamics Division. Over the years, Washington has published almost 200 papers in professional journals, garnered dozens of national and international awards, and served as a science advisor to former presidents Carter, Reagan, Bush, and Clinton.

Washington became one of the first developers of groundbreaking atmospheric computer models in collaboration with Akira Kasahara when he came to NCAR in the early 1960s. These models, which use fundamental laws of physics to predict future states of the atmosphere, have helped scientists understand climate change. As his research developed, Washington worked to incorporate the oceans and sea ice into climate models. Such models now include components that depict surface hydrology and vegetation as well as the atmosphere, oceans, and sea ice.

An Introduction to Three-Dimensional Climate Modeling, written by Washington and Claire Parkinson in 1986 and updated in 2005, is a standard reference in the field.

Washington’s past research involved using the Parallel Climate Model (PCM). His current research involves using the Community Climate System Model (CESM) to study the impacts of climate change in the 21st century. Both models were used extensively in the 2007 Intergovernmental Panel on Climate Change assessment, for which NCAR scientists, including Washington, and colleagues around the world shared the 2007 Nobel Peace Prize.

As the second African-American to earn a doctorate in the atmospheric sciences, Washington has served as a role model for generations of young researchers from many backgrounds. He has mentored dozens of graduate students, as well as undergraduates in the UCAR-based SOARS program (Significant Opportunities in Atmospheric Research and Science). In 1999, Washington won the Dr. Charles Anderson Award from the American Meteorological Society “for pioneering efforts as a mentor and passionate support of individuals, educational programs, and outreach initiatives designed to foster a diverse population of atmospheric scientists.” 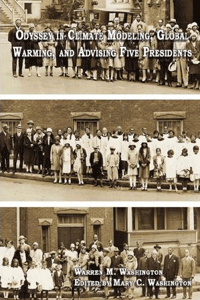 In its 3rd edition (originally published in 2006), an Odyssey in Climate Modeling, Global Warming, and Advising Five Presidents, authored by Warren and edited by Mary C. Washington, provides an autobiographical journey through Warren Washington's life, from early experiences -- including the struggle for civil rights -- to his work advising U.S. Presidents on climate change. Warren's contributions not only to climate research and modeling, but additionally his tireless efforts to pave the way for greater diversity in the scientific fields, is an inspiring read.

From 1978 to 1984, Washington served on the President's National Advisory Committee on Oceans and Atmosphere. He participated on several National Research Council panels and chaired the council’s advisory panel for Climate Puzzle, a film produced for the 1986 PBS television series Planet Earth.

Washington held the office of President of the American Meteorological Society in 1994 and was Past President in 1995.

He served on the Modernization Transition Committee and the National Centers for Environment Prediction Advisory Committee of the U.S. National Weather Service. In 1998, he was appointed to the National Oceanic and Atmospheric Agency Science Advisory Board, until 2002.

In 1995, Washington received the French Meteorological Society’s Le Verrier Medal. In February 1997, he was inducted into the National Academy of Science’s Portrait Collection of African Americans in Science, Engineering, and Medicine and in May 1997, he was awarded the Department of Energy Biological and Environmental Research Program Exceptional Service Award for Atmospheric Sciences in the development and application of advanced coupled atmospheric-ocean general circulation models to study the impacts of anthropogenic activities on future climate. He was selected to be a Sigma Xi Distinguished Lecturer for 1998-1999. Also, in 1998 he delivered the University Corporation for Atmospheric Research Walter Orr Roberts Distinguished Lecture and a Rice University Computer and Information Technology Institute Distinguished Lecture. In 1999, Washington received the National Weather Service Modernization Award.

In 1999, Washington was awarded the Dr. Charles Anderson Award from the American Meteorological Society "for pioneering efforts as a mentor and passionate support of individuals, educational programs, and outreach initiatives designed to foster a diverse population of atmospheric scientists."

In March 2000, Washington received the Celebrating 20th Century Pioneers in Atmospheric Sciences Award at Howard University and in April 2000, the Colorado Bonfils-Stanton Foundation Award "in recognition of significant and unique contributions in the field of science." In 2001, he gave the first Ralph W. Bromery lecture at the University of Massachusetts, Amherst. Bromery was a Tuskegee Airman and later became the chancellor of the University of Massachusetts.

In February 2002, Washington was an invited lecturer at the Cleveland Museum of Natural History's Explorer Series.

Also, in February 2002, the National Academy of Engineering (NAE) announced that it had elected Washington to its membership "for pioneering the development of coupled climate models, their use on parallel supercomputing architectures, and their interpretation."

Washington was inducted into the NAE in October 2002.

In 2002, he was appointed to the Science Advisory Panel of the U.S. Commission on Ocean Policy and the National Academies of Science Coordinating Committee on Global Change.

On April 26, 2003 Washington was elected to the American Philosophical Society.

In August 2004 Washington received the Vollum Award for Distinguished Accomplishment in Science and Technology from Reed College in Portland, Oregon. The Vollum Award was created in 1975 as a tribute to the late C. Howard Vollum, a 1936 Reed graduate and lifelong friend of the college. Winners are selected for the perseverance, fresh approach to problems and solutions, and creative imagination that characterized Vollum's career. Bill Gates, Steve Jobs, and Linux creator Linus Torvalds were previous winners of this award.

In June 2006, Washington was the commencement speaker and recipient of an Honorary Doctorate of Science at Oregon State University.

In October 2006 Washington was the Robert D. Cess Distinguished Topics in Atmospheric an Oceanic Sciences Seminar Speaker at the State University of New York at Stonybrook.

Washington was elected honorary member of the American Meteorological Society (AMS) in 2006 and received the Charles Franklin Brooks Award from the AMS for outstanding services to the Society in January 2007.

A Symposium entitled Climate Modeling, Prediction and Science Policy, was held in Washington’s honor at NCAR in August 2007.

Washington received a Lifetime Achievement Award from Raymond L. Orbach of the U.S. Department of Energy in August 2007. "In recognition of a lifetime of extraordinary contributions to National and International science, on behalf of the U. S. Department of Energy, I wish to express our appreciation. You [Warren Washington] have advised five Presidents, given wise and insightful counsel to colleagues, advice to the Department of Energy and other Federal agencies, and mentored directly and as a role model to enumerable young people. Your numerous scientific contributions to climate modeling have provided new knowledge on how the Earth's climate may respond to human and natural system changes. I commend and thank you for your service to science and to humankind."

In December 2007, Washington was appointed to the Board of Trustees of the H. John Heinz III Center for Science, Economics and Environment.

In May 2008, Washington was a commencement speaker and recipient of an Honorary Doctorate from Bates College in Lewiston, Maine.

In January 2008, Washington along with colleague Dr. Gerald Meehl received The Jule G. Charney Award from the American Meteorological Society "for outstanding collaborative contributions to modeling climate and its response to anthropogenic and natural forcings."

Washington was elected to the American Academy of Arts and Sciences in April 2009.

Washington was selected as letter contributor for the book "Letter from Leaders" along with T. Boone Pickens, Walter Cronkite, Gerald Ford, Dali Lama, Vladimir Putin, Donald Trump, and others. This book was published by Lyons Press in May 2009. Also in May 2009 he was the recipient of a Green Award from Essence Magazine.

The Warren Washington Special Symposium was held in Washington’s honor at the AMS Annual Meeting in January 2010.

In 2010, he received the James E. Steward Award from the American Association of Blacks in Energy [AABE Awards].

In 2010, he received the Charles Hosler Medal from Pennsylvania State University in recognition of "your remarkable career as a talented scientist and skillful leadership".  The year 2010 also saw Warren receive the highest scientific honor bestowed by the U.S. President, the National Medal of Science, for his fundamental contributions to the understanding of Earth's coupled climate system through numerical simulation, leadership in U.S. science policy, and inspiring mentorship of young people of all backgrounds and origins.

In 2012, Washington was interviewed by Dr. Ralph Cicerone as part of a grant to interview African-American scientists. "A Night with Warren Washington" is scheduled to be broadcast by PBS in Fall 2012.

In 2016, Washington was named an NCAR Distinguished Scholar.

In 2019, Penn State University named a building in honor of Dr. Washington.

In 2019, Dr. Washington was awarded the Tyler Prize for Environmental Achievement along with Michael Mann.